Metal ions trapped in crystalline microporous solids known as zeolites are promising solid-state catalysts for a wide variety of oxidation reactions1–3. In the past few decades, there has been intense research into the structure and nuclearity (the number of metal ions) of the active sites in these zeolite-based catalysts4,5. Despite these efforts, there is still no agreement on the nuclearity: the proposed number of metal ions in the active sites ranges from one to three1,2,4,5. Writing in Nature, Gordon et al.6 propose that there are two titanium ions in the active sites of a well-characterized industrial zeolite catalyst called titanium silicalite-1 (TS-1), challenging the widely accepted idea that there is only one. Their work has implications not only for TS-1, but also for other metal-containing zeolites for which the structure of the active sites is not yet fully established.

TS-1 has a rich scientific and industrial history3,7. It started with the seminal work3 of industrial researchers in the early 1980s, who prepared it by partially replacing silicon atoms with titanium atoms in a zeolite that has a particular type of porous structure (the MFI structure). They found that TS-1 catalyses several oxidation reactions, most notably the epoxidation of propylene (H3CCH=CH2) — a reaction in which an oxygen atom in hydrogen peroxide (H2O2) is added to propylene’s carbon–carbon double bond (Fig. 1a). The product of this reaction is propylene oxide, a compound widely used to manufacture the building blocks of polyurethane plastics. This initial work spurred further industrial interest, and led to the use of TS-1 as a catalyst for the commercial production of propylene oxide8. 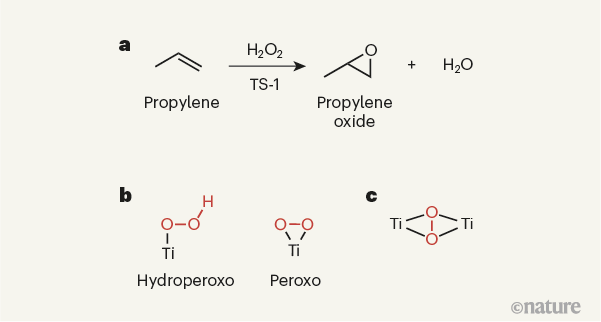 Figure 1 | Active sites in an industrial catalyst. a, The solid-state titanium-containing catalyst titanium silicalite-1 (TS-1) is used industrially to promote the reaction of propylene with hydrogen peroxide (H2O2), which yields propylene oxide as the product. b, The catalytic sites of TS-1 were thought to contain single titanium (Ti) atoms. It was presumed that a variety of titanium species could potentially form on reaction of TS-1 with hydrogen peroxide, such as hydroperoxo and peroxo species (hydroperoxo and peroxo groups are shown in red). c, Gordon et al.6 now report strong evidence that TS-1 instead produces a species in which a peroxo group is sandwiched between two titanium atoms. Note that the titanium atoms in the solid-state catalyst will be bound to other atoms, which are not shown here.

The structure, composition and performance of TS-1 have been investigated in great detail, with the aim of making catalysts that are more active and stable than existing ones for a range of oxidation reactions, and which promote the highly selective formation of targeted products. On the basis of a wide variety of characterization methods, there has been a general consensus about the type of active site needed to activate propylene for epoxidation, and about the reaction intermediates involved in the process9,10. More specifically, the active site has been thought to be mononuclear — that is, to contain a single titanium ion. This ion is presumed to activate hydrogen peroxide, leading to the formation of an intermediate peroxo (O–O) or hydroperoxo (HO–O) species (Fig. 1b), which then reacts with propylene to form propylene oxide.